This bread is called a Panmarino and when I first read about it in Carol Field's The Italian Baker, the story of this bread was so interesting I just knew I had to adapt Carol's recipe to a sourdough formula. It is a bit cold in my kitchen this time of year so I have opted for a 40% preferment in the final dough.

The story of Panmarino as told by Carol is that this bread recipe comes from a place called Ferrara near Venice and is the invention of a baker named Luciano Pancalde. Apparently years ago, Luciano was reading a biography of the d'Este family who once ruled Ferrara. He came across descriptions of the spectacular court banquets, which featured rosemary bread with a crust that "sparkled with diamonds". Of course, just like all good artisan bakers, Luciano experimented and baked until he came up with this wonderful aromatic, fresh rosemary fragrant, dome-shaped bread where you slash the top in the pattern of a star and sprinkle chunky crystals of sea salt into the crevices.

I start all my breads on Wednesday evening for a Saturday morning bake but you can actually make this bread over a shorter time. The slow long ferments at cool temperatures helps to build flavour but if you want to use a different timetable check out SourDom’s discussion about baking timetables on the beginner’s blog.

The first night I got out my starter and made my first build of the preferment.

The next morning (10-12 hrs later) I added some more water & flour for the second build.

That evening I mixed up the dough as per the formula below. I started by dissolving and mixing the preferment with the water and milk. I let this sit for 10 minutes while I weighed up the flour and chopped up fresh rosemary. The recipe calls for 3 1/2 to 4 tablespoons of fresh rosemary finely chopped or 1 1/2 dried. You can adjust this to taste but I prefer a nice strong flavour myself.

I then combined the flour and diastatic Malt and mixed that into the liquids to form dough. I let the dough sit for 20-30 minutes before adding salt.

The salt, olive oil and chopped rosemary were kneaded into the dough, which was mixed until the gluten develops. The dough was then placed in an oiled bowl and covered in a plastic bag to seal it, before being put in the fridge overnight.

*Diastatic Malt 10 is powdered Malt blended with Bread Flour at 1g Malt to 10g flour. Diastatic Malt is normally added at 0.1% of flour weight. You could leave out the malt or substitute a teaspoon of Barley Malt if you wish.

In the morning before going to work I took out the dough and folded it once and returned it to the fridge.

Take out the dough let it warm to room temperature over the next 4-5 hours as you gently stretch and fold it. I just folded it once every hour for four hours and kept it from drying out by putting it inside the plastic bag in-between folds. The dough should by velvety smooth, moist and blistered by the time it is ready for shaping.

The dough is finally shaped into a round ball or boule and placed in a round cane banneton or basket which I put inside a plastic bag and let rise for an hour or so before putting the whole lot back in the fridge for baking in the morning. Be sure to cover the dough in the fridge so it does not dry out too much.

Baking: I heat my oven to it’s maximum which is 250ºC. I use a baking stone, which I have allowed to heat up for 40 minutes before baking. Just before you put the loaf into the oven slash the top of the loaf in an asterisk with a razor blade. 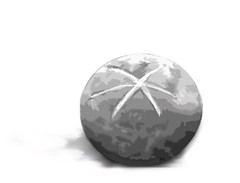 Sprinkle some chunky sea salt into the cuts

To provide steam I place my loaf in the oven at maximum temperature and then turn it off and throw a handful of ice-cubes into the bottom of the oven. I turn it off because my oven is fan-forced and the fan would blow all the steam away. I leave it steaming for 10 minutes and then turn the oven back on and set the temperature at 210°C and bake for 30 to 35 minutes longer. 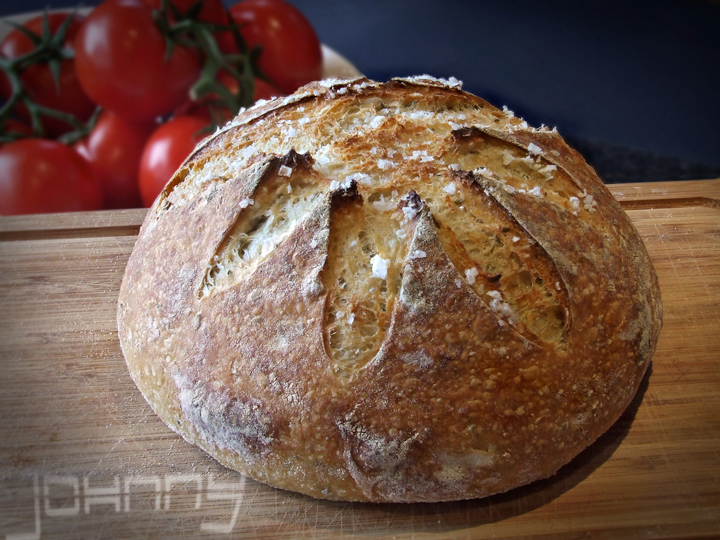 Let it cool before cutting and the reward is a deliciously fragrant bread that is bound to impress. 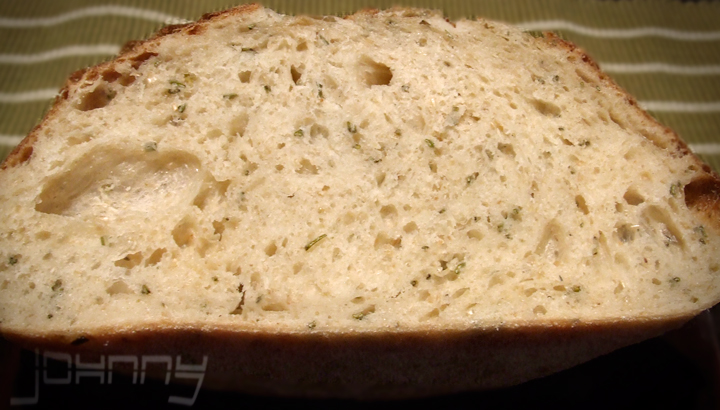 It is a fairly simple bread to make and has a wonderful soft texture that goes very well with roast Pork, Chicken or Lamb. 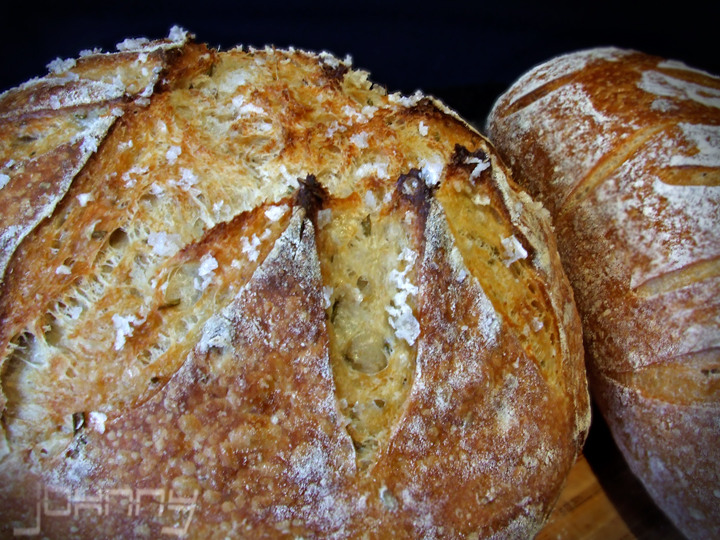 Thanks, Johnny for sharing your bread (formula) and the story. Beautiful sparklies...

I started off with sourdough a few weeks ago and now have a great stable starter which sits happily in the fridge (I'm very proud of it actually, and my family are endlessly teasing me about my new fascination!)  I've refreshed my starter a couple of times this weekend to get it going and have been looking for a different recipe to try tomorrow.  This bread sounds great, and we are having Roast Chicken tomorrow, so I am just about to pick some Rosemary and try it.  Thanks for the inspiration!

Great Joy, let us know how it turns out. I made this again at Christmas and everyone loved it. Goes great with a roast!

Success!  I slightly speeded up the process as I was starting 24 hours before we wanted to eat the bread.  But it went really well.  I made the dough Sat am (using less Rosemary than you suggested as I didn't have too much left on my plant over winter), left it at room temp all day, kneading and folding periodically.  Then left it in the fridge overnight, then Sunday am divided the dough in two.

With one half I made a foccacia style bread, studded with black olives.  That was really delicious.  With the other, I just made a regular loaf.  The olive bread with the chicken was delicious and we polished everything off, giving a slice to our 2 guests to take home for supper.

The regular loaf made a great sandwich for last night's supper, and more for today.  Yum!

Sounds great Joy..yum, rosemary and olive always a good combo. I'm glad it all turned out well for you and your guests. It reminded me of the great night I had trying out my new sourdough bread making skills last year. I picked the Panmarino for that night also, just because it goes so well with roasts and looks so good. One of my dinner guests was Italian so I was trying to impress and I must say the whole night was a great success and the breads were a sensation. sourdough.com/blog/johnny/seven-hour-lamb-and-sourdough-breads

I made this again over the weekend for a Church Youth Group Barbeque; this time made two foccacia style loaves - same recipe but pressed them out into 2 baking sheets with my finger tips to make indentations, then drizzled liberally with olive oil.  Into one I pressed olives (marinated with chillies as that was all I had in the cupboard), into the other halved cherry tomatoes and sprinkled both with chopped garlic.  The young people (aged 11-19) ate everything and declared it very delicious.  Thanks again - I will continue to make this wonderful bread :)

As Homer Simpson would say...

...though I haven't sliced into it yet. But WOW it looks and smells GREAT! Thanks for the recipe!

I have been looking for a recipe that includes Rosemary, and although I am new to Sourdough baking, I would love to attemt this recipe.  My question is though, the starter that I have (now on the 5th day) is 50 % flour and 50 % water (100 %).  How would the measurements change for this recipe?  I am not good at figuring out the baker's percentages I'm afraid.

Any help will be appreciated.

Given that you start off with only 12g of your culture, the hydration of it will not make a significant difference once it has gone through the second build to 200g.

Best of luck with your baking.

This looks and sounds just magnificent! I will try it soon, but as i live in Noosa and with the weather warming up i will need to alter some of the timing , I think. What do you suggest?

this recipe will be the first with rosemary that I have found.  I  know when the mix gets a glutenous texture, it all binds together, right?

I have been experimenting with panmarino recipes that used bigas.  Our niece referred me to your recipe, which sounded so delicious; I created a starter.  I baked my first "Johnny's Panmarino", yesterday.  It is not as pretty as yours (how could it be?!), but it is delicious!  Hopefully, I can upload some pictures, later.  Many thanks for the adventure!

Hi Johnny, I bake this bread very frequently now; it is simply delicious and very pleasing.  What I would like to try: panmarino dinner rolls.  I had thought to use some oiled de Buyer rings for the final proving, remove them and slash/salt just before baking.  Have you any tips for making rolls with this recipe or would you advise against it, please? Many thanks for the lovely recipe. Brew Cat

This is a great recipe...Love the dough, it shapes up beautifully.  And the taste is great...I like subtle flavours so only use 1T of herb.

Looks great Trish - I love the nice blistery crust. I have not made this bread is years but now you have inspired me to go back and make it again.

Thank you for providing this recipe and the fascinating history, I intend to try it soon, although I'm not sure I'll be able to source the malt - is the malt essential?

I also thought I'd point out what my Italian background tells me:

You said the original inventor was Luciano Pancalde - would it surprise you to know his surname literally means "hot bread"! In a sense, this is not so surprising because many surnames derive from the occupations of the holders. Doesn't happen so much these days, if at all, but in Italy, it wasn't just occupations that spawned surnames, it was also silly nicknames.

Anyway, thanks again for sharing this.

Hey there, fairly new at bread baking. The starter after the second build was very active and also very very dry. So the dough texture was different than I’m used too to begin with. Not very wet or sticky. When you say ‘kneed it until gluten forms’, how long is that? I believe I over kneeded and this morning my dough is pretty firm and not fermented looking in the fridge. Not sure this puppy is salvageable!

Great bread, manged it without the Diastatic malt and only half the Rosemary. The house smells amazing. Thanks

I have been baking panmarino for like ten years, and have never thrown ice cubes into my oven. Thank you a thousand times. I am soooo for real doing this. Spritzing the walls < throw ice!