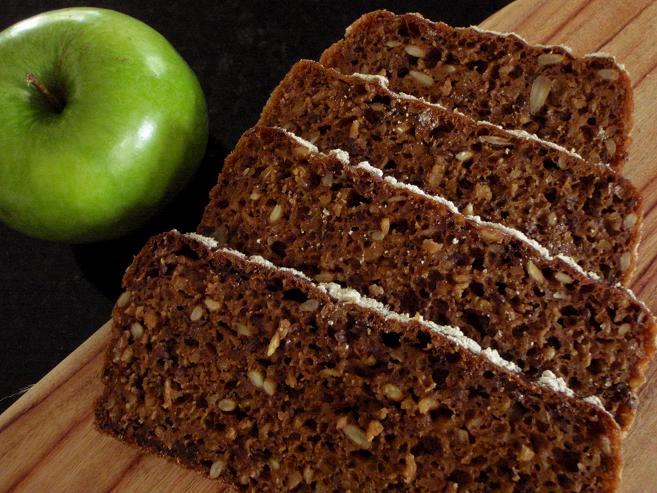 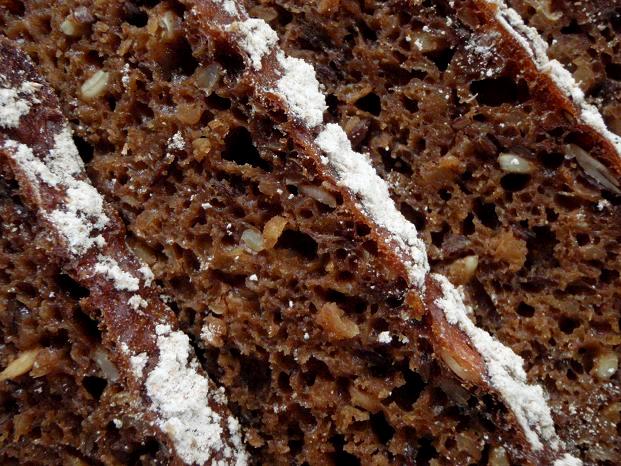 The 40-year old Swedish chef-owner, Mathias Dahlgren, has two Michelin-starred restaurants, Bon Lloc and Matsalen, the latter in Stockholm.  His style of cuisine is Swedish traditional as well as innovational (a fusion of Scandinavian, Tuscan, Californian and Oriental dishes).

I saw a picture of his Swedish Rye Bread in [i]Coco: 10 World-Leading Masters Choose 100 Contemporary Chefs[/i], page 101, and decided to give it a try.  The recipe uses a rye sourdough starter.  It also has a high percentage of instant yeast and molasses, which is 4.7% and 19%, respectively, of total flour, rye gains and seeds.  The approx. dough hydration is 84%.

The bread is exceptionally moist and flavourful.  For a person who does not normally like a lot of rye flour in bread, I find this bread quite delicious.  The bitterness from the Black Strap Molasses that I used, together with all the grains and seeds and the fermented rye flour, formed a very interesting flavor and texture.

There is something, however, not quite how I would like it in a fully-loaded bread like this one.  If no changes were made to the recipe, I would probably not make it again.  As with the Chinese concept of ying (feminine) and yang (masculine), for something to be balanced, there has to be a ying and a yang element simultaneously.  For instance, the enjoyment of a fatty and salty pork chop (the yang) is enhanced if it is eaten with, say, apple sauce (the ying) - the sourness in the apple sauce cuts through the fat while the sweetness in the fruit compliments the saltiness in the meat.  Another example: the best chocolate lava cake would have some salt in there, or the sweetness would make you sick.

The issue with this bread for me is: it is perhaps a tad too masculine (too much "yang") because of all the rye grains and seeds in the recipe.  I have no doubt that there are plenty of people who love this bread just the way it is.  I just have a difference taste.  To address the imbalance to my taste, I am adding apple puree as a hydration for the final dough.  Also, I have changed the formula to a sourdough version.

I find molasses an attractive ingredient to add to a bread full of rye, grains, and seeds but too much of it makes the bread bitter so I cut it down in my formula (below).

Mix all the ingredients together and let stand at room temperature for 12 hours or at least overnight.

Mix the ingredients together and let stand at room temperature for 12 hours or until ripe.

My father-in-law and his wife came to stay for Christmas.  They are very discerning diners and both keep in good shape.  They have been told by their doctor to NOT have too much bread made of wheat flour and that if they must have bread, rye and spelt breads are the best.  Whenever they come to visit, I try to make rye and/or spelt sourdough for them.  For today's lunch I served this bread.  They loved it.

Tomorrow morning, when my father-in-law and his wife leave, they will have this little prezzie, all nicly sliced-up to go.

I'm not sure what that is. I've found rye seeds for sale online but I don't want to buy them if they aren't the right thing. The other items I've seen online are called crushed rye grain but they are for beer brewing so I'm pretty sure that they have been fermented and I don't think that is correct either. If you could clarify or even post a link to a site that sells crushed rye grain I would really appreciate it because this bread looks so good I would really enjoy making it.

Awesome bread, you can see the moisture in the bread.   I bet it tastes just as awesome as it looks...

I'll look for some rye grains at out health food store...

I know this is an old thread but when I noticed come up in the pictures down the side a while ago  I was intrigued and gave it a go. I couldn't find rye grains so I just adjusted the amount of linseeds and sunflower seeds and also added pepitas. I found it to be too moist after I added the apple in the final mix, so I added a reasonable amount more flour until it was more workable for me.

Anyway, it was amazing, I loved it. It stays very moist, toasts well, is nice with savoury or sweet toppings and freezes well too. I am making another batch today after mixing up the 2 soaks last night. Yum!

I just tried this recipe out because I wanted to make some heavier darker ryes with a lot more going on. Sadly, it wound up being a huge disappointment of uncooked batter dough after the 45 minutes of baking time.

I weighed the ingredients and used a very healthy rye starter at 100% hydration. Used Rogers Dark Rye and Bread Flour with some unsweetened canned apple sauce. The rye berries (not malted or sprouted!) came from a local wine making store and were crushed for me. The dough looked like a chunky cooked oatmeal/cake batter once everything was mixed together and was divided between two loaf pans. My stove is brand new and working flawlessly (I just made a spelt/kamut sourdough a few days before!). I preheated it for an hour before and I have two pizza stones inside. The dough sunk in the pans after I lowered the heat to 365F and after 45 minutes I pulled them out to cool ... Here's what it looked like out of the oven.

If anyone has suggestions as to where things might have gone wrong I'd love to hear them.

Not sure if TP is still around, haven't heard anything from her for ages.

The recipe would certainly make a very gluggy batter as described as there is only about 450g of flour in total (including starters) and a lot of that is rye.  Then there is the water and molasses and the apple puree adding to the 'liquid' so I would guesstimate something in excess of 100% hydration.

The heading says 'with an apple twist' whereas the recipe specifies what appears to be a whole large tin of puree so I am wondering whether there has been a misplaced decimal point there and perhaps that should be 35g.  Just a thought.  Maybe try with less apple and aim for more of a dough consistency rather than a batter.

Good luck with your projects and let us know how you go.