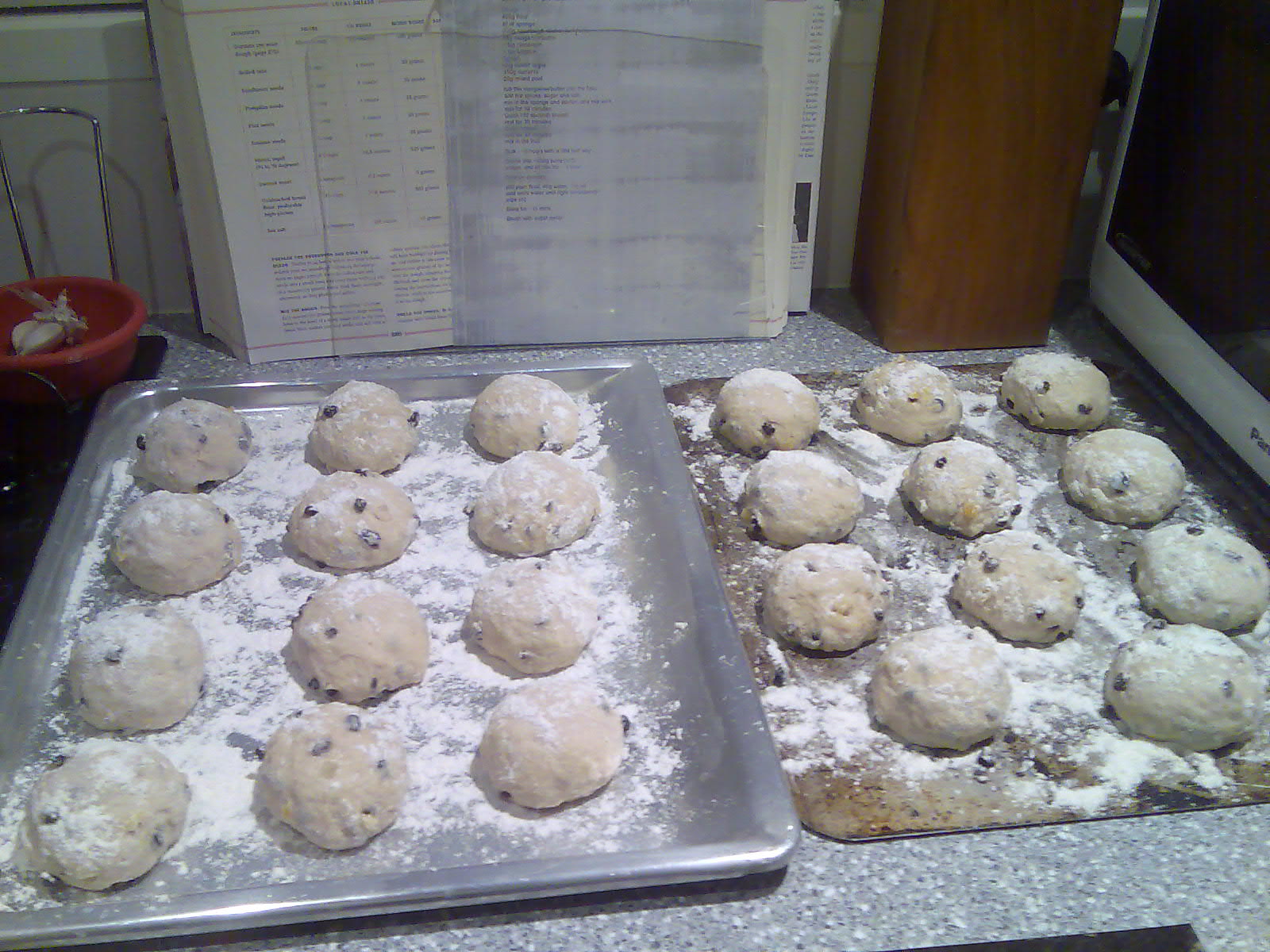 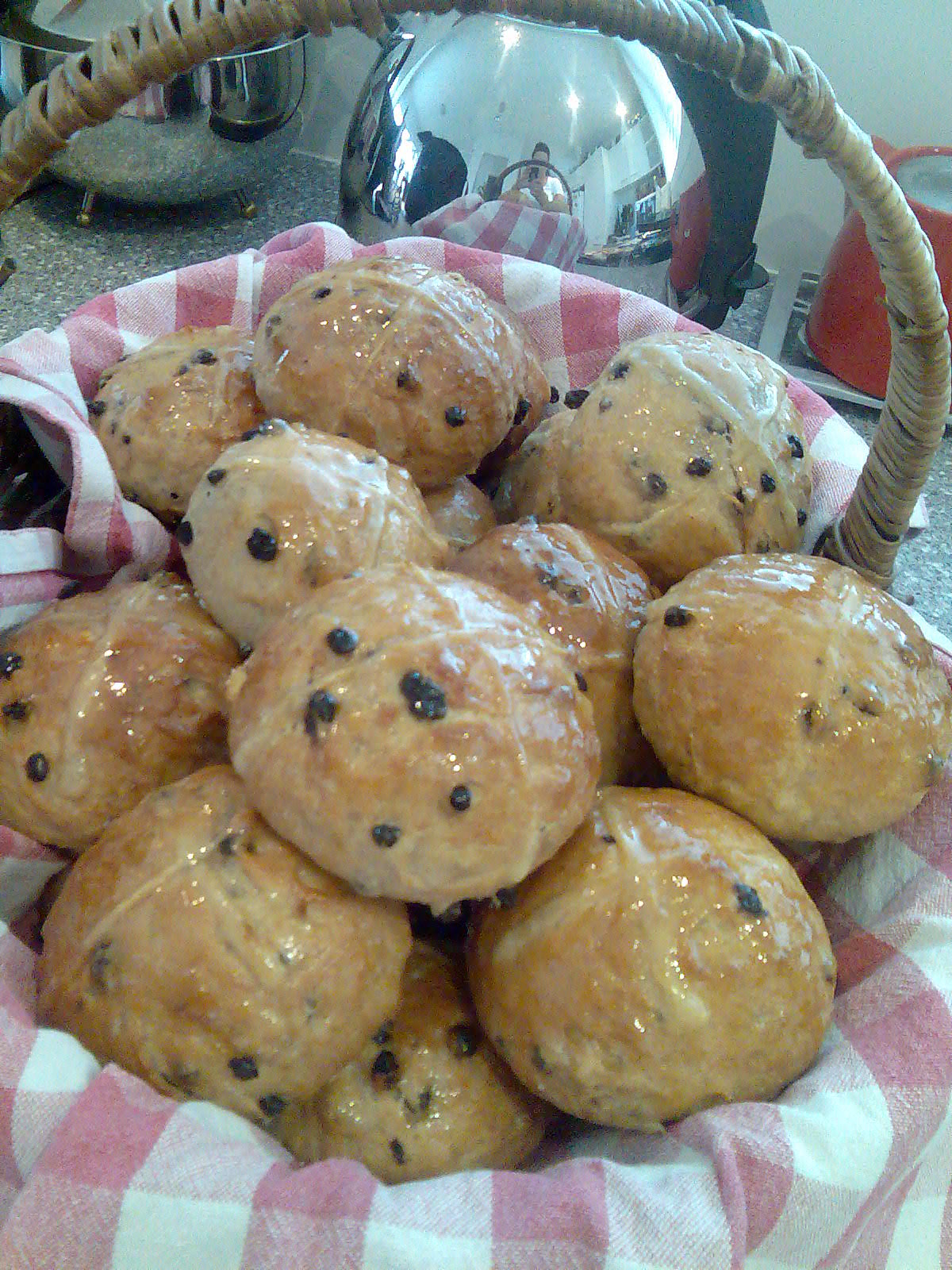 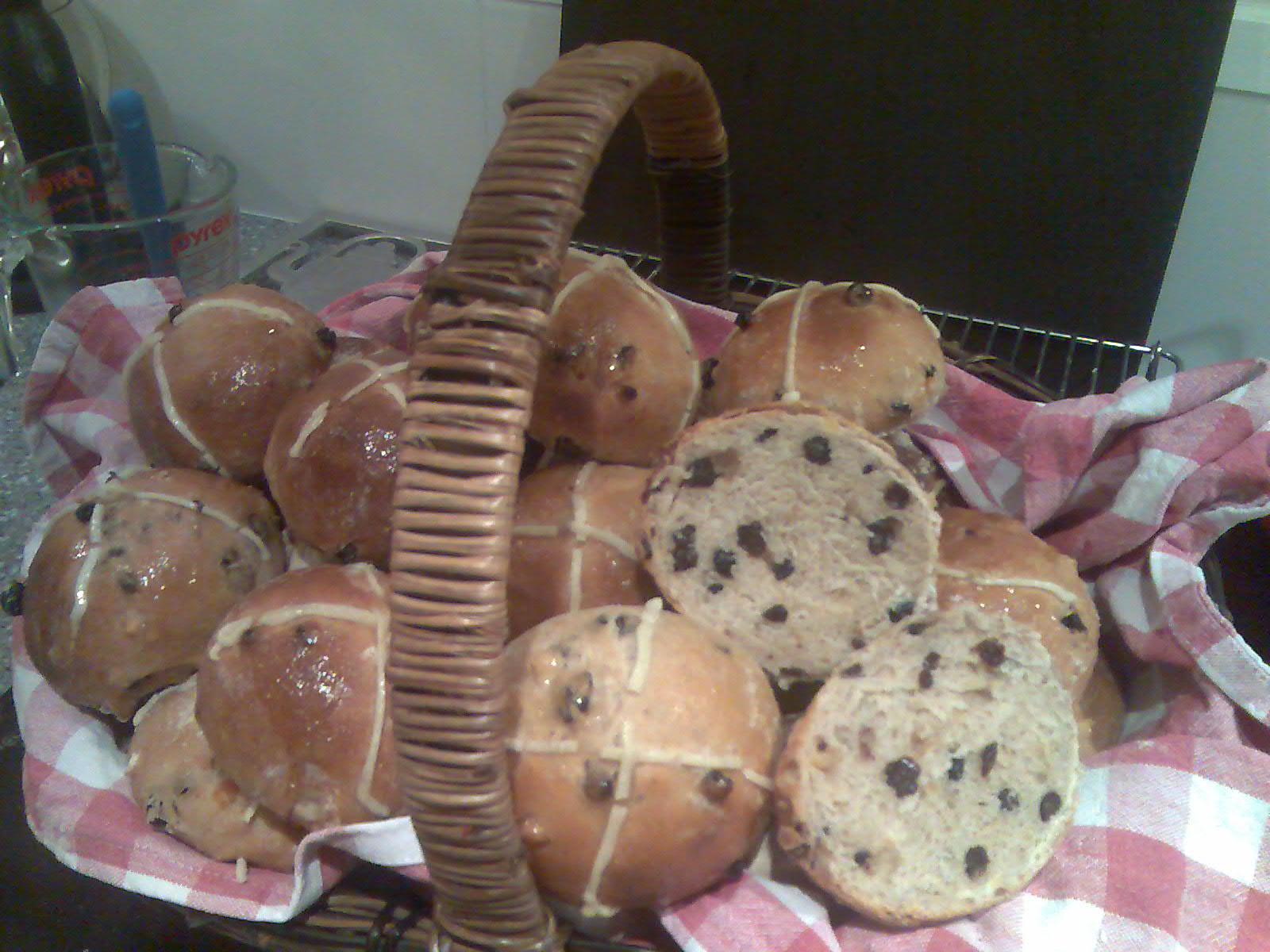 This recipe was posted in a forum Dom kicked off a few years back, and since I was finding Hot cross Bun recipes using sourdough hard to find, I thought I'd remind you of this one ........ just in case anyone was looking for a great one.  This is a hybrid recipe, but it's just lovely.  The sourdough gives the buns substance - unlike all the airy-fairy waste of times ones that are on offer in most shops.

Dom mentioned the recipe was a version of Jeffery Hamelman's recipe in 'Bread'.

You first make a sponge using the first four ingredients, mix and leave for one hour - mine got nice and frothy and almost looked like it wanted to rise.

Then for the dough, add the remaining ingredients to the sponge.  Dom said to rub the butter into the flour, but I just softened it and then mixed it.  It was pretty much blended in after kneading.  Once the ingredients were all 'wet' I let it sit for about 15 mins, then tipped it out onto an oiled bench, oiled my hands and gave it 10 second knead.  The dough was quite wet so I did have to use my dough scraper to scoop the clingons off the bench.

I let it sit for 10 minutes while I cleaned out my bowl (actually I used my large preserving pan to mix it in as I made a double recipe).  I then oiled the 'bowl' and gave the dough another 10sec knead, and plopped it back in the 'bowl' for another 10 minutes.  I did this twice more (by which time the dough wasn't nearly so sticky), then let it ferment at room temp for about 2 hours with a fold at half time.  The evening air temp here is about 20C at the moment.

After the ferment I tipped it out on to a bench floured with rice flour and divided it up into about 100g pieces - both times I've made this recipe this week (double recipe) I got exactly 23 buns - they were all mostly just over 100g.

I let the cut dough rest for about 5 mins then shaped them into rolls and put them on oven trays - my first batch I put baking paper on the oven tray, the second batch I just floured the tray with rice flour, both methods were fine.

I then let them proof at RT covered in a towel for about one hour.  Before putting them in the oven, I piped on crosses using a mixture of flour (60g), water (40g) and oil (15g) - I added a bit more water to make the consistency right for piping.  The second time around I used some cornflour as well as didn't think the crosses on the first lot were that obvious, however they cracked during cooking so maybe next time I'll use a little less cornflour - the colour of the cross was better though (sorry about the ugly looking bag with the remnants of the piping mixture behind the tray!)

I baked them at just over 200C for about 25 minutes, switching the trays around in the oven at half time.  Actually the first batch I baked I had the oven at only 200C and they didn't colour up as much as I would have liked, so i bumped it up a bit tonight when I made the second batch.

After removing them from the oven I brushed them with a sugar syrup (equal parts water and sugar, heated in the microwave until sugar dissolved), then tried to let them cool before seeing how they tasted!  Like little red riding hood I took a basket full to work and they were scoffed in a flash - needless to say my staff were pretty happy with me on Wednesday!   .............. other days perhaps not so much!

I was much happier with the colour of the second batch - although haven't tried them yet, so maybe looks don't count for much!

Thought it would be remiss of me if I didn't include a crumb shot ....... then thought the wee bun looked so good cut open and wouldn't it be a shame not to eat it?!  Quite happy to say the taste as good as they look! :o)  Might even make this my first link to Susan's YeastSpotting!

Happy Easter everyone, and thanks Dom for posting this recipe back in 2006.

Very pretty! Thanks so much for sending them to YeastSpotting!

Karniecoops - thanks for the link, and I am glad that you enjoyed this recipe.

I haven't been around for a while, but saw Graham's link to your recipe, and thought I would put my two bobs worth in.

Here it is again for the record:

Mix/knead briefly, leave for 10 minutes
repeat,
Bulk for 3-4 hours, with folds every hour

Brush tops of buns with (soy) milk
Pipe on crosses

Make sugar syrup
25g caster sugar
25g water
simmer in saucepan until dissolved, and then a minute or two

Glaze warm buns with sugar syrup after they come out of the oven.

Thanks Dom, I will try out the full sourdough version perhaps without crosses and will pretend they're not Easter buns!  If they're better than the hybrid recipe, the must be outstanding, as these were great!  In fact, I don't believe I've ever made so many HCB that have been eaten so fast!  Roll around Easter

I seem to have trouble resizing my image...