I saw a post on The Fresh Loaf by someone looking for a formula for a Lemon Rosemary bread. This combination sounded really good to me so I decided to give it a try. First I had to decided how much Lemon Zest and Rosemary to put into the bread and I decided to try for about 2% for each of them. Then I decided that I would use up the last of my bread flour and use some fresh milled whole wheat and rye. I figured on a hydration of 70% and that the percentage of the sourdough preferment would be 20%. It is summer time here and the temperatures have been hot so I figured less preferment would slow things down a little bit. I now had a plan on how I was going to make this bread now I'll tell you how it went.

The first night I made my first build of the preferment.

The next morning I add more flour and water to the preferment for the 2nd build.

When I got home from work the afternoon I mixed the dough up as follows.  First I dissolved the preferment into the water and then mixed in the bread flour. I let this sit while I went and milled my wheat and rye flours. Next the wheat and rye flours were mixed in and the dough was let sit for 30 minutes. We have Rosemary growing in the yard so I went and picked enough for 11 grams and then chopped it up into small bits. I used a small grater to make Lemon Zest from one lemon and ended up with 12 grams. I added the Lemon Zest, Rosemary, Salt and the Lemon Pepper infused Olive Oil all at the same time. The rosemary went in first and my first reaction was it was going to just over power the bread. The Lemon Zest went in last and after that all I could smell was lemon. This seemed like it was going to be one powerful bread. I mixed the dough until the gluten developed. Then the dough was turned out into an oiled bowl and placed in the wine cellar for a cool ferment. Four hours later I placed the bowl in the refrigerator so I could cook it when I got home from work the next day. I checked the dough in the morning before I went to work and it had raised up to touch the plate that I place on top of the bowl. When I got home that day the dough was lifting the plate off of the bowl. I set the bowl out and let the dough warm up for two hours. Then I turned out the dough on to a floured work surface and folded the dough over on itself to get some flour on all the surfaces of the dough. When I looked at the dough after I did this the dough looked so nice I just want to bake it like that without shaping it any more. I figured that if I rolled it over onto some parchment paper that it just might work. Then I put the dough into a counche and turned the oven on to 460°F to preheat it. I used a cast iron roasting pan to bake this bread in so it is oiled and preheated in the oven too. When the oven gets up to temperature I place the dough in the pan and cook it with the lid on for 25 minutes and then the last 15 minutes without the lid. The bread had great oven spring and just looked wonderful to me when I pulled it out. The aroma of the bread just filled the house but now I had to get some sleep. Cutting the bread would have to wait for the next day at work were my coworkers are my bread testers. My testers really liked the bread. They were eating great big slabs of the bread all day long. I told my boss what kind of bread that I had made and she said she didn't like Lemon Rosemary. Later a coworker tells my boss how great it tastes and talks her into trying a slice of it. My boss then emails me telling me how great the bread is. There were many great compliments on this bread, it was just incredible.
Method:

Bread good enough to eat it on its own. Muchas gracias for the formula...
Your description & detailed 'notes' were wonderful to read and had my taste buds going :)
Hope I get to try something like that when I finally (and I will) get TP's baby to become active.
Many thanks
Annie
Great timing LD. I'm on a rosemary kick at the moment and lemon & rosemary are such a great combo. I am definitely making this one just as soon as I try the Blue Cheese Rye.. keep em coming
I baked this today and I like it very much. I basically used the Panmarino recipe but added the zest of a lemon into the dough. 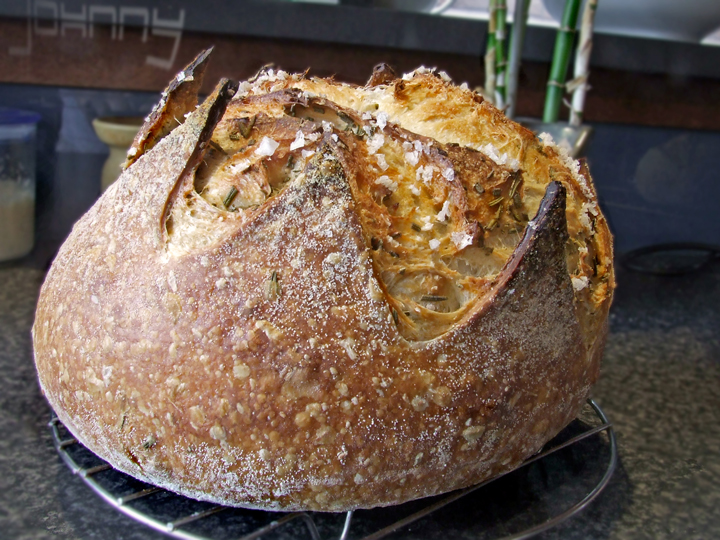 My star slashes did not come out too well and the bread oven spring sort of blew out one side. I decided to mix the lemon and rosemary into the dough after bulk fermentation and right before shaping. This ended up not being a good idea. It made it difficult to get these ingredients spread evenly throughout the dough. So I had to try doing it over two folds to get the rosemary and lemon zest into the fairly firm dough. 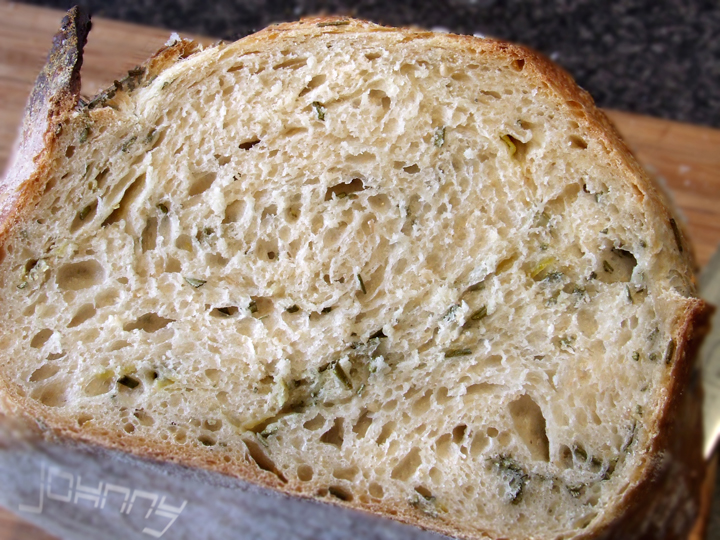 So as you can see from the crumb shot the bread has nice irregular holes but the rosemary and lemon is a bit clumped together rather than nicely dispersed throughout the loaf. Still this bread is really nice and I think it will become a bit of a favourite of mine.
Lovely, lovely crumb, Johnny. I added orange zest to a bread last week (no pix) and I felt it brought a nice fresh tang to it. I can imagine lemon and rosemary. Mmmm....