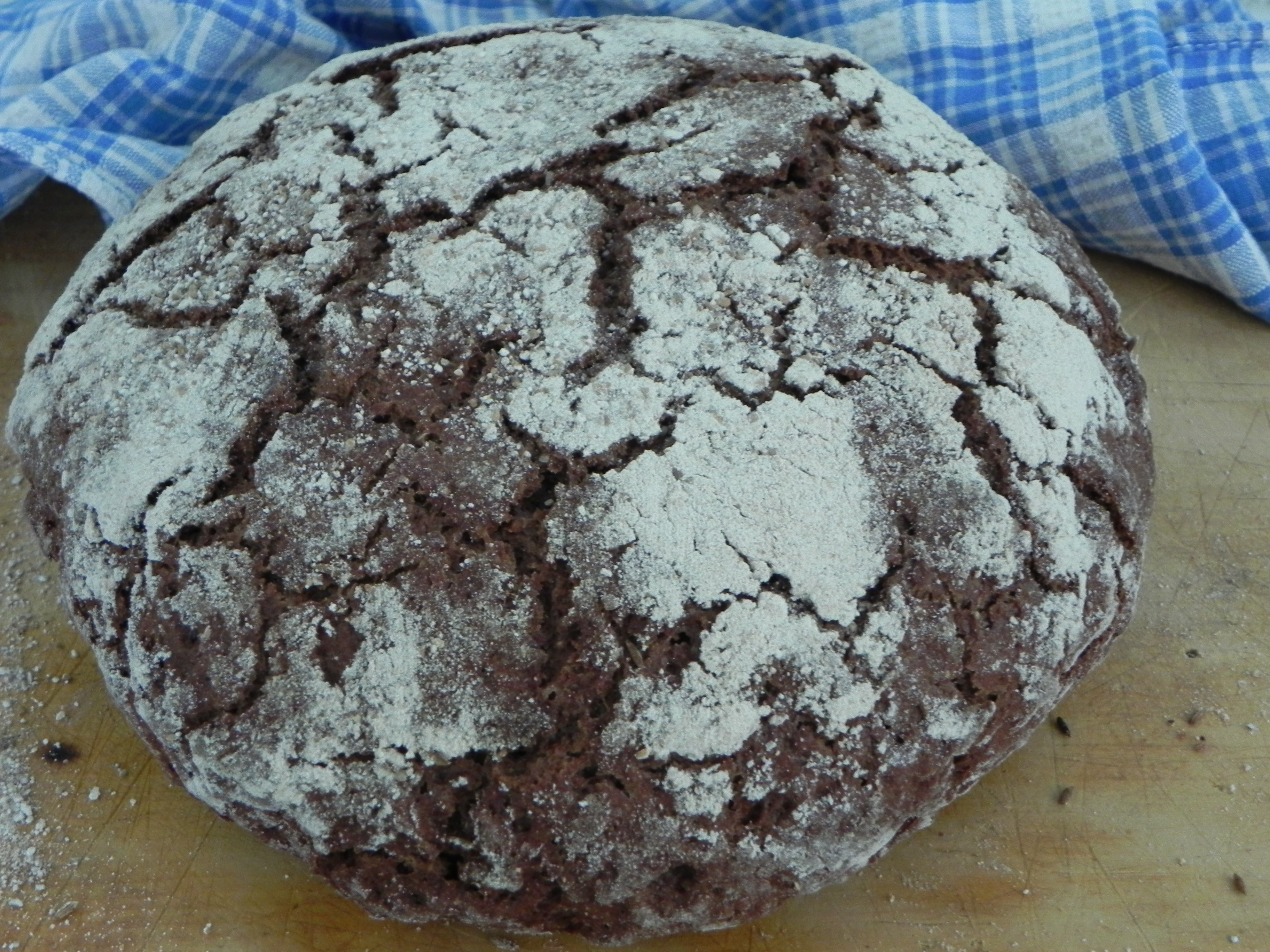 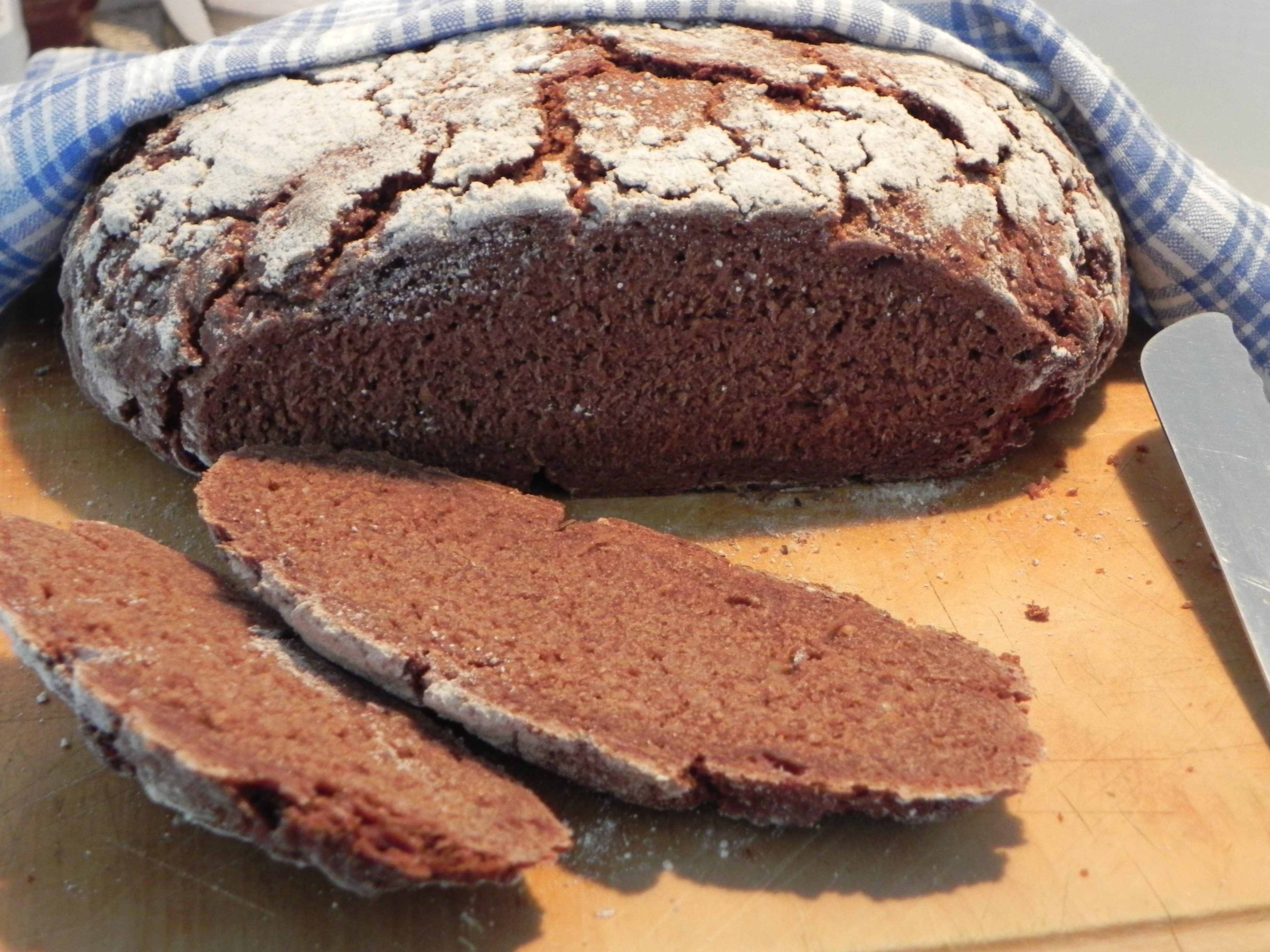 I adapted this recipe from the one given on the side of the bag of rye flour I purchased whilst on holiday.  The recipe was a fully yeasted loaf and included molasses and butter which I swapped out for pomegranate molasses and no replacement for the butter (didn't see the point in using it).  Apologies for all the measurements being in cups, but the house I was staying in did not have any scales.

Since most rye bread recipes I've been trying have had some yeast in them, I halved the amount used in the original recipe, but in hindsight it could have been halved again (or even omitted completely with longer fermentation/proofing times used).

The night before I refreshed my rye starter (yes I took it away on holiday with me!) using 50g starter, 100g water and 75g medium rye flour.  This sat at RT for about 12hrs before making the dough.

The yeast and molasses were added to the water and left to do their thing while I measured out the dry ingredients.  I added the starter to the water mixture, then the flours/cocoa and lastly the salt.  Mixed to a shaggy dough and let sit for about 10mins, then gave it 3x 10sec kneads over half an hour covering it while resting.

The dough was place in an oiled bowl and let to ferment at RT (about 24C) for a total of an hour with a stretch and fold at half time. I was a bit nervous as to how this bread was going to taste, as all I could smell whilst kneading was the cocoa!  I really didn't fancy  a chocolate tasting loaf, and was hoping the flavour of the rye was going to win out.

I shaped the dough into one large round and placed head first into a tea-towel lined bowl to proof.  To ensure I couldn't taste any cocoa, I slightly wet the bottom of the loaf and sprinkled over some cumin seed and gently pressed them onto the dough.  The loaf proofed for a total of 40mins.

The oven was preheated to 250C and was turned down to 200C when I slid in the loaf.  I also threw in a handful of ice cubes for a bit of steam.  The loaf got turned around after about 20 mins, and at 40 mins total baking time it still felt soft on the sides so I dropped the temp to 180C and left it for another 10mins, after which it felt much firmer.  The top of the loaf had crackled nicely all over giving it the "lava" type appearance of the Auvergne Rye I've made previously.

After letting it cool for an hour or so I couldn't resist trying a slice to check for the cocoa flavour and I was very pleased to find there was none!  It had a nice taste, soft, moist crumb and a decent crust.  The colour was dark but a bit odd, but I guess that's what the intended purpose of the cocoa was, the dark colour.

Would I make it again?  Yes I would, but I'd try it without the yeast.

At 50% rye I would have expected a more open crumb.  My 80% rye looks about like yours.....maybe a second hour of proof would open things up a bit.  You certainly got a nice dark color.  Best.

I think your bread looks delicious. I've been experimenting with black rye and have made loaves with lots of different ingredients including ground up blackened bread (Hamelman's recipe). Not all breads are meant to have an open crumb. I like the rich texture of these dark rye breads. Makes them perfect for sandwiches and toast. Your bread looks lovely wrapped up in a tea towel - I keep mine that way as well.  I especially like the natural look of the crust.

Recipe looks awesome. The beautiful color is enough for me (not really), the taste is even better I am sure. I am wondering if I put it into a pizza oven and piled on some rasberries, cream cheese, and walnuts if it would turn out to be a rasberry cheesecake pizza! But seriously, thanks for sharing.