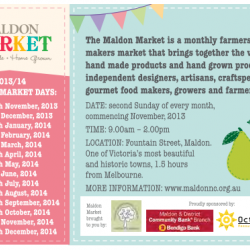 Bread Builders bakes once a month exclusively for the Maldon Market - Hand Made, Home Grown held on the second Sunday of the month in Maldon, Victoria.

Ken Hercott grew up on an organic wheat farm in the |Mallee in Victoria, Australia and became interested in baking at an early age. Experimentation at home and regular bread sales to his local community, inspired him to improve his skills. An informal apprenticeship in Massachusetts under master baker, Richard Bourdon of Berkshire Mountain Bakery, raised his baking skills to a professional level and continued his commitment to producing a quality product that is the mainstay of a western diet. Other trips to sourdough bakeries throughout California  and meeting Alan Scott expanded his baking repertoire, particularly in using wood-fired ovens.

Ken returned to Australia to bake with pioneer sourdough baker and bread author, John Downes at Newrybar and then at
Carlton North Natural Tucker Bakery.

His professional baking career includes work at Purebread in Surrey Hills and St Andrews Bakery as well as being a stalwart of CERES selling bread at the Saturday market and holding regular bread classes.

Ken’s passion for sourdough bread  led him to Europe, where he has been involved in the re-emergence of British naturally leavened bread at Daylseford Farm bakery, bakery-crawls in Paris and baking and teaching on Fattoria Barbialla Nuova, in Tuscany. Ken and his family returned home to Australia in 2011, where he now works with Paul Demshey at Sprout Bakery in Castlemaine, Victoria.

Ken has recently established Bread Builders and bakes once a month for the Maldon Market which was launched in November 2013.